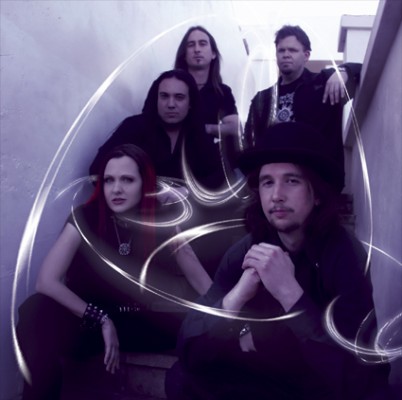 Chalice is unlike anything you’ve ever heard before. There’s is a unique style of moody metallic rock with a distinct folk flavour, whispers of progressive technicality and intense dynamics, fronted by an unmistakable female voice.

The beginnings of Chalice go back to 1997, when Shiralee began seeking fellow musicians with the intent to create heavy emotional, melodic music. It was at this time she joined forces with former drummer and lyricist Adrian, and the initial incarnation of Chalice was born. 1998 saw the introduction of guitarist Sean, along with other members since departed, and a promotional CD was recorded. On the strength of this CD, Chalice signed to Modern Invasion Music. Soon afterwards they were joined by guitarist Justin to record their first album, “Chronicles of Dysphoria”, which also featured a session violinist. By the time of the album’s release, their ranks had been swelled by the addition of Alana on flute, whose ethereal quality brought a new dimension to the Chalice sound. “An Illusion to the Temporary Real” was then recorded, and released in late 2001. Simon took up the role of bass player shortly before their Australian tour in 2002, completing the line-up heard on Chalice’s third album, “Augmented”. In March 2004, Chalice announced the departure of drummer/lyricist Adrian, leaving Shiralee as the only remaining original member. Mat Enright had been working with the band for some time on a session basis before finally officially becoming their new drummer in March 2005, after which Chalice put together their fourth and most heartwrenching release, “The Calm That Was the Storm”. This enhanced EP features two markedly different versions of the title track, as well as fresh revisitations of a song from each of the previous three albums, enriched by the warmth and drama of Adelaide’s Zephyr Quartet playing breathtaking string arrangements by Joel Baligod, and a bonus feature of the video clip for the title track.

To date, Chalice’s most notable triumphs have included: overwhelming crowd response at Australia’s national heavy music festival, Metal for the Brain, 2 years in a row; “An Illusion to the Temporary Real” being voted in the top 5 Australian albums in a Triple J (national radio) listener’s poll; support billing with international artists such as Norway’s extreme metal legends, MAYHEM, Sweden’s gods of melodic metal, OPETH, as well as LEAVES’ EYES & ATROCITY; and a successful overseas expedition for some live appearances and the shooting of the “The Calm That Was the Storm” video clip in New Zealand.