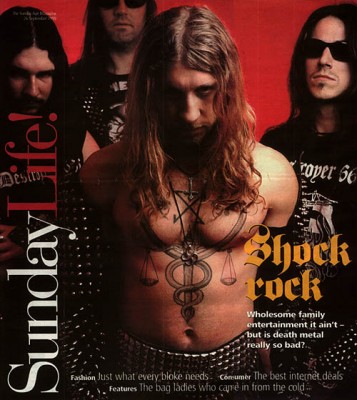 Signed to Modern Invasion label for their first 2 recordings.

Keith Warslu, formerly the founder of early BESTIAL WARLUST era ‘Vengeance War Till Death’ until he moved onto his solo project DESTROYER 666. In early 1995 Keith Warslut entered the studio & recorded his first recording ‘Violence Is The Prince Of This World’ which was released in January 1996 on the Modern Invasion Label. This recording was very raw, produced in 3 studios, 2 engineers & several guest musicians. Such reflected inconsistent quality of the recording which despite that possesses the ultimate magnetism of supreme talent as a composer of Keith DESTROYER 666 & fruited the artistic climax classic like ‘The Eternal Glory Of War’. This superior composition was also selected as one of the jewel tracks for ‘Blackend 1’ double compilation compiled by Tim Chilton for the Plastic Head label Blackend in the U.K. making this fast recognition to DESTROYER 666 as a major force in the world of the boiling art metal scene.

Early 1996 Keith recruited 3 musicians both for the forthcoming recording as well as to build the foundation to permanent group able to perform live in supreme heavy as hell fashion.

New partnership which on ‘Unchain The Wolves’ has drums played by Coz from GOSPEL OF THE HORNS & a further DESTROYER 666 musician was injected with the lead guitar devil recruited Shrapnel, who arrived from a classical background adding new dimension to the group’s maturity and supreme sound. For the CD recording Bullet Eater (Venom Phil ex-HOBB’S ANGEL OF DEATH & ex-BESTIAL WARLUST) proudly stood to penetrate DESTROYER 666’s Art Hell War deep with his virile potent creative bass playing. On Destruktive Destroyer drums Jarro Deceiver.

The new recording took place in Melbourne’s Woodstock Studios under the flag of engineer supremo Mark Ingram & was completed in August/September period. This recording was mixed by Tony Nesci in January 1997 in Adelaide.

Now titled ‘Unchain the Wolves’ this recording surpassed his previous title by 100% both in production quality as well as maturity by Keith Warslut’s superior composing talent. This time compiled from 8 tracks with Keith Warslut’s soul truly sold as ever to the spirit of DESTRUCTION’s ‘Infernal Overkill’ and foundation of early SODOM & BATHORY in four shorter tracks on average 5 to 6 minutes. The other four tracks show climaxing maturity of truly world class compositions ranging from 9 to 11 minutes each with rich complex undertones moving forward to the spirit of BURZUM with burning breath of BEHERIT.