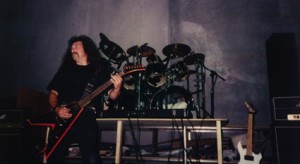 With the impressive writing skills of PETER HOBBS, the Australian Metal Scene came to light led by tunes like Marie Antoinette & Chainsaw Massacre amongst others of heavy-handed metal. The name of TYRUS soon changed into the SLAYER-inspired “ANGEL OF DEATH” which was lengthened soon after to become the now classic name HOBBS’ ANGEL OF DEATH.

HOBBS then teamed up with some of the best musicians in town featuring SHAM (drums), KARL (bass), WOOLLEY (guitar) & PETER HOBBS (vocals/guitar) who then went to Melbourne’s Doug Saunders Studios & recorded their first 6-track demo simply titled “ANGEL OF DEATH”. This demo was produced at an extremely low cost, within only a few short hours & with sustained supreme quality. This demo achieved sales of over 1200 copies in a very short space of time & attracted the attention of international record labels, one of which was the frontier crushing SPV (Steamhammer). With many new compositions complete, the progressing group HOBBS’ ANGEL OF DEATH attracted new members – supreme drummer Darren McMaster-Smith, Steve Scott (bass – from the legendary band mighty RENEGADE) & Mark Woolley (guitar NOTHING SACRED), This demo superseded the first effort & immediately secured a record deal with SPV/Steamhammer.

HOBBS’ ANGEL OF DEATH left for Berlin to HARRIS JOHNS (famous producer for VOIVOD, KREATOR, HELLOWEEN) to record their self-titled album whilst the cover-art was painted by SEBASTIAN KRUGER (who produced the covers for bands like TANKARD, DESTRUCTION & numerous other Supergroups).

HOBBS’ ANGEL OF DEATH remains one of the most important metal phenomenon from the Oz metal scene, amongst names like AC/DC which makes HOBBS ANGEL OF DEATH the most influential Australian metal artist the world has ever heard.